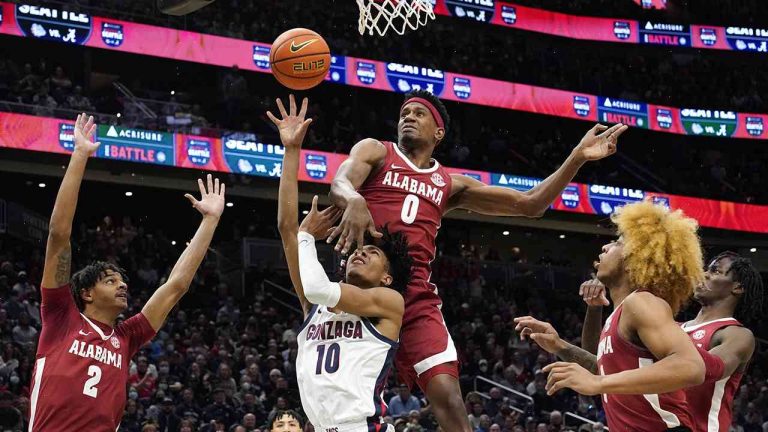 Gonzaga plays Florida in the Sweet 16 on Saturday

We are into overtime against Alabama, but it’s Gonzaga who are stretching their lead to 74-70. You may want to head for the toilets.

That’s when a little tunnel collapsed beneath the centre court at TD Garden. The I-beam ceiling was at an angle, and when it gave way the cables that support it buckled and collapsed.

All the seats were evacuated as a precaution, and there were some minor injuries, but coach Mark Few assured us on the BBC that everyone had been extracted.

When were we in this kind of turbulence?

So what on earth happened? Here is the tweet:

Nobody knows. The condition of the floor in the main concourse is completely unknown, and as yet there are no reports of any metal objects falling. It looks like the main sponsor, AT&T, have supplied the spectators with plastic to cushion themselves.

So where is it going?

Currently the court is being tended to with the help of a surgeon-in-residence at Boston Medical Center, which sent him in to examine the damaged equipment.

Next up, we may be in session again as the Centre Court area will be locked out of the Court One section from Saturday’s quarter-final. Other Court One courts will open to the public.

That’s no use to the Arizona Wildcats, who have been trailing top seed Michigan State in their third-round game in Nashville. They trail the Spartans 62-40.

What makes these countries so tough for US visit?