UN Secretary-General Antonio Guterres and the United States on Wednesday called for an investigation into a demonstration in Myanmar’s largest city that turned deadly after a group of Buddhists allegedly clubbed a Muslim man…. 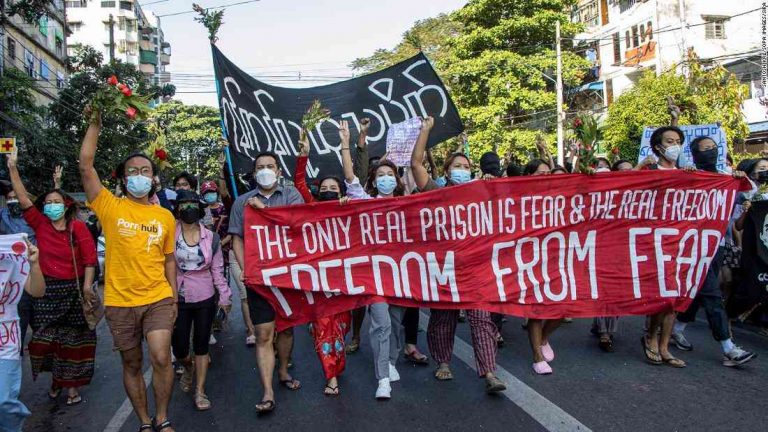 UN Secretary-General Antonio Guterres and the United States on Wednesday called for an investigation into a demonstration in Myanmar’s largest city that turned deadly after a group of Buddhists allegedly clubbed a Muslim man.

Guterres issued a statement saying he was “profoundly concerned” over the death of student protestor Sakine Htoo, 18, who was rushed to a hospital on Tuesday night. He said he had ordered UN human rights experts to investigate.

The victim was celebrating his 19th birthday and was reportedly beaten by a group of 35 people, many of them men. The student reportedly had no registration with the Myanmar police. It is unclear whether he was carrying any documents. The alleged attackers were not arrested.

The statement said Guterres was “deeply concerned at reports that at least one person was killed, many others injured, and property has been vandalized by a large group of youths, following a demonstration in Rangoon, Myanmar.” It did not identify any specific groups, although a UN source said that Sakine was involved in a group of students who staged a protest at a multi-cultural center earlier in the evening.

Myanmar opposition leader Aung San Suu Kyi, who is under house arrest in Rangoon, the city’s administrative center, supported the protest, which organizers said was peaceful.

The US State Department on Wednesday denounced what it called “the extreme violence” against Sakine, the AP reported.

“The U.S. condemns the extreme violence that broke out at the rally. We are extremely concerned that a large group of youth armed with sticks attacked a peaceful opposition leader, triggering violent reprisals from the Myanmar security forces,” it said in a statement.

“I condemn the horrific killing of Sakine Aung, a student leader and law student, which brings to 13 the number of people killed in this shameful clampdown on peaceful protestors,” he said.

Protest leader Iftekhar Muhammed Sittwe said he attended the group’s weekly meetings and complained that “everyone must be prepared for violence when they are peaceful” and urged Buddhists to oppose violence.

The demonstration was against military presence in Yangon, where three members of a protest group were arrested earlier this month for destroying a Buddhist statue and eating a Buddha image in a Yangon park.

On Saturday, activists staged a 3-mile march in Yangon calling for foreign companies and government leaders to take an interest in human rights in Myanmar, where the past decade has seen some of the worst violence against the country’s minorities.

Earlier this month, at least 25 people died after protesting on the anniversary of anti-Muslim violence that swept the country in 2012.

The Myanmar security forces have committed numerous abuses against the country’s Rohingya Muslim minority, who are not recognized as a minority under Myanmar’s 1982 law that bans citizenship to people from the country’s Rakhine state.